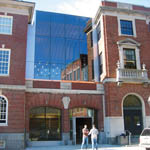 2011-2013
Capital Campaign Consultant
The special challenge of preparation and early implementation of North Bennet Street School’s capital campaign was their general lack of a strong fund-raising operation and no capital campaign in 30 years. We spent considerable time on preparation, assessment and hiring of new staff, organizing systems and research, creating a Campaign Planning Committee, envisioning communications. Additionally an early feasibility study had predicted only modest success. The power of a dynamic, talented and charismatic school president combined with strong campaign preparation brought in double the original estimate in the first six months. The school was off and running and I was able to step back.